Does God Send Storms Into Our Lives to Shape and Mold Us? 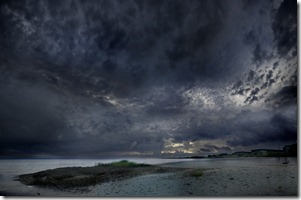 I recently heard a sermon preached about storms. More specifically, it was about God ordained storms in our lives. I agreed with most of what this man of God was preaching but when he started talking about God sending storms into our lives to shape and mold us I just couldn’t say amen to that.

I’m not going to mention any names I disagree with because it’s not a fight against flesh and blood, it’s the thoughts and ideas that spread like cancer that I want to confront. These ideas infect people’s souls like a virus and they paralyze the church.

What Would (21st Century) Jesus Do?

The Jesus many preach today would have acted much differently 2,000 years ago. The 21st century Jesus would not have rebuked the storm. Instead He would have turned to the disciples and gave them a three point sermon about how those waves and the wind were going to humble them. He may even have closed His sermon by telling them that even if their boat capsized they would all go to heaven so don’t worry.

Well the real Jesus didn’t do that and I’m so glad He didn’t. Instead He took authority over the elements and commanded the storm to cease. The reason I’m talking about this one story about Jesus and the storm is because Jesus is a perfect reflection of the Father. He is the best image of God we have. And if Jesus did not bless any storms then why do we insist that Father God does? Is Jesus Christ perfect theology or not?

I’m not just talking about natural storms (the world calls them “acts of God” now because the church has done such a good job at pointing the finger at God every time a disaster happens). I’m talking about the bad things that happen in our lives – we call these things “storms”. But let’s take a couple real life scenarios and see if we see God’s fingerprints on them or not.

These are always good for an example. Let’s say Bob is 45 years old and facing some tough times. He is about to lose his home, his business and he’s on the verge of bankruptcy. Many Christians will say Bob is going through a storm.

But what many people don’t know is that Bob has lived beyond his means for 10 years. He never saved a dime and instead spent $120,000 a year even though he only made $90,000. He maxed out five credit cards and has two car payments on top of his mortgage payment and line of credit he took out on the home.

Now who caused this storm?

Obviously this was a problem of Bob’s own making. Nowhere in the Bible are we instructed to go into debt and live foolishly like this. The good thing about God is that He is faithful even when we are not and if Bob turns to God with his whole heart then God will show him a way out. But just because God is faithful even when we are not does not mean God brought this upon Bob.

When someone is sick many Christians immediately blame God. Now they don’t necessarily come out and point a finger at God but they will say things like “God is allowing this sickness for a reason” or the more popular “Everything happens for a reason.”

How reassuring. Someone is sick and instead of finding hope in a God who heals we find comfort in some worldly cliché? I’m sorry but that doesn’t sit right with me.

This example is not like the financial one. I’m not implying that if someone is sick it’s because they did something wrong. I want to emphasize the truth that God’s will is healing. Just like His will is love and salvation. And that all too often well meaning Christians think God is the one responsible for the sickness.

Is this what a Loving Father Does?

Now it would be one thing to wonder when God is going to show up to calm the storm. But it’s something altogether different when we accuse God of creating the storm and also of sending it to visit us. Is that what a loving Father does? Does He look at His children and say, “Little Jimmy is so cute. But he is getting an awful big head these days. I think if I sent someone to rob his house and also gave him cancer then he would be a bit more humble.”

Why Does it Matter?

It matters because if the enemy can convince us that God is the one who is stealing, killing and destroying then he gets to attack  the people of God unchallenged. Satan is afraid of sons and daughters of God discovering who they are and what kind of power and authority they have been entrusted with.

If you can’t overpower them you must outwit them. The enemy knows this and is desperately trying to keep people from the knowledge of God. That’s why so little teaching is devoted to our authority and power in Christ. God has called us to steward these mysteries and to be ambassadors for Him on the earth.

It seems like these days more Christians are offended by God’s amazing goodness than anything else. We love stories of suffering but stories of deliverance, healing or provision have somehow been branded as being a little less spiritual. As if the suffering of our Savior was not enough for us. We think we can add to it and help sanctify ourselves through self-inflicted suffering.

May God give us all understanding in these things.

As always, feel free to leave a comment below. And if you disagree with me that’s perfectly alright too.