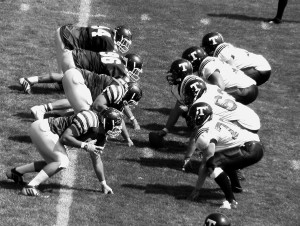 They think they’re destined for a continual struggle against the enemy.

So instead of running the next play they bow their heads to the ground and accept defeat, “I guess you’re right. I thought I had the ball in my hand but I guess I don’t.”

But it’s time for God’s children to wake up.

It’s time to stop listening to the lies.

It’s time to use the power and authority we’ve received to destroy the works of darkness.

No more ‘hiding out until Jesus comes back!’

It’s time to take the ball and make the next play.

The church is a church of power. That’s why Jesus says in Matthew 16:18, “And I also say to you that you are Peter, and on this rock I will build My church, and the gates of Hades shall not prevail against it.”

Did you catch that?

He didn’t say “the gates of the church will prevail.” He said, “the gates of Hades, or hell, shall not prevail.” Which means the enemy’s gate is the one being attacked. He’s the one who is really on defense!

So remember, and believe, this.

It will change your whole outlook on life and the “battle” we’re in.

For more information on this read the Bible.