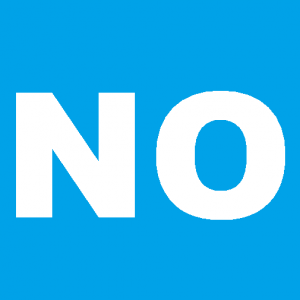 No is a powerful and important word.

And now that I have a 1-year-old daughter I use it now more than ever.

“No Emma, don’t crawl up the stairs!”

But I’m also learning that saying no is important in other areas of life.

When I first became a Christian I was pretty much incapable of saying no.

I’d say yes to every volunteer activity, church meeting and group. So much so that I wound up having a commitment 6-7 nights a week!

And after a while I realized that being busy with Christian activity was not the same as growing spiritually.

I also realized that I didn’t like to say no because I really wanted to please everyone.

Fast forward 9 years and I no longer say yes to everything. In fact, I say no to most things. And I don’t feel bad about it.

So that’s all I got today. An admonition to say no more often. For obvious reasons this message isn’t a popular one at most churches.

But most churches focus on Christian activity instead of spiritual growth. Remember that.

And remember that you only have one life to live. When it’s all said and done will it matter how many church activities you were involved in or that you took the time to know Him?

Sorry this post isn’t more organized… I wrote it on the fly tonight. But hope it speaks to someone out there.