What if Joshua Accepted His Circumstances or Was a DIY Type? 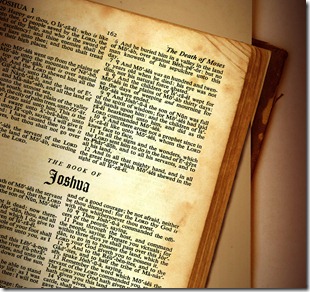 I was reading Joshua this morning and something really stood out to me. It was the truth that it’s God who prospers us and the truth that we play a significant role in this. I saw a beautiful example of God and man co-laboring together to accomplish His purposes in the earth.

Every place that the sole of your foot will tread upon I have given you, as I said to Moses.

Did you see God’s part and man’s part right? God who said He would give the land to Joshua but Joshua still had to tread upon the enemy.

And then I noticed it again in verse 8,

This Book of the Law shall not depart from your mouth, but you shall meditate in it day and night, that you may observe to do according to all that is written in it. For then you will make your way prosperous, and then you will have good success.

The key to Joshua’s prosperity was found in meditating in the Word and then acting upon what he learned. God then said Joshua would make his way prosperous and that he would have good success.

Then in verse 9 God tells him not to be afraid because He would be with him wherever he went. So again we see man’s part (meditating and obeying the Word) and God’s part (His presence going with him).

I think this is important because it’s tempting to fall in one of two ditches along the path. One side says that anything that happens must be God’s will because He is on the throne. Let’s call this the Acceptance Camp.  And the error on the other side is to try to do it all ourselves without trusting in God. We’ll call this the DIY Camp.

Let’s pretend Joshua attended a self-help seminar out in the wilderness and decided he was just going to accept the circumstances that came his way as God’s will. God is on the throne so anything that happened must be ordained by the Lord.

“Joshua, our scouts have spotted the Canaanites advancing upon us from the west and the Hittites have been seen approaching from the east! What are your orders, sir?”

Joshua sets his new self-help book, The Power of Acceptance, down and looks at his commander and says, “We will not do anything. We will accept this as God’s will – our pathway to peace.”

Can you imagine what his men would have thought? Or more importantly what would have happened to the people of Israel?

Now let’s imagine Joshua got it into his head that he could take the promised land without any “spiritual” help from God. It’s not that he didn’t love God, it’s just that he couldn’t justify meditating in the Law of the Lord day and night when he had work to do. He needed “practical” answers and strategies to win battles.

So Joshua comes to Jericho and thinks, those are some big walls. How will I get my men inside to destroy the city?

“March around the walls,” a voice in his head says.

Since Joshua wasn’t accustomed to meditating in the Word and hearing God’s voice he dismisses this voice as one of his crazy thoughts.

“Nonsense. I will attack the main gate and set up archers on the hillside. I will use all my military training to bring this city to their knees.”

I have a feeling that would not have turned out well.

God in His great wisdom has shown us how to walk on the path that leads to life. His Word is a lamp to our feet and a light to our path. Holy Spirit is our great Teacher and will lead us into all truth. We have a part to play. Decisions to make. It’s true that God has all power and authority but it’s also true that He has delegated authority to man.

Do you find yourself in the DIY Camp or the Acceptance Camp more often? For me I tend to error on the DIY side. Leave a comment below and share your thoughts.