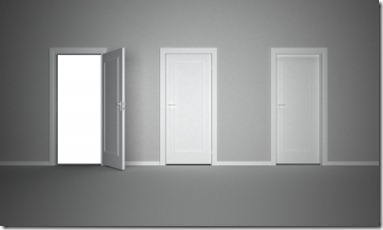 Lord, if this is your will, I pray you would open the door. And if it’s not, then please shut the door so no man can open it.

Have you ever prayed like that? Don’t worry, I’m not going to make fun of you (because then I would by a hypocrite since I just wrote about not making fun of people in my last post). I just want you to think about the whole “open/shut door” prayer strategy and if it’s really the best way He wants to lead you.

When we pray, “God will you please open the door” we usually mean, “God if this works out, I’ll know it was you.” Now, I know that fleeces are in the Bible and I don’t think it’s a sin to put a fleece out, but I do think its problematic when our relationship with our Father is overly dependent on open and shut doors.

I know many people like the saying, the Lord works in mysterious ways, but let’s remember that God’s ways have been clearly revealed to us in His Word and by His Spirit. He wants us to know His will for our lives, not constantly stuck in some spiritual maze, riddled with open and shut doors. He wants to lead us in a more personal way.

I’ve probably said the “if you open the door I’ll walk through it” prayer hundreds of times and here is what I’ve learned. A clearly defined open or shut door is rare. Most the time I end up what I call, playing Clue with God.

Remember Clue? It’s the classic detective game where players move from room to room in a mansion to solve the mystery of: who done it, with what, and where? It’s a great game for those who enjoy reasoning and thinking things out. I think you know where I’m going with this.

Trying to figure out the mysterious ways of God’s will by always looking for open doors is like trying to win at Clue.

Ok God, am I supposed to move to North or South America? Should I go to college and study under Professor Plum or join the military and serve under Colonel Mustard?

Would you rather be led by God’s voice or through a maze of open and locked doors? I don’t know about you but hearing someone’s voice is a lot more personal and meaningful then wandering around until I find a doorknob that turns. The more I seek God the more I crave His voice. I don’t just want to assume that because things work out that it’s God’s will. I want to hear the Holy Spirit speak to my spirit. And when we know that we know that God has spoken something to us then no locked door will stand in our way!

So what about you? What has helped you learn God’s will for your life?

God's WillGuidanceLed by the Spirit